A city's economic profile can provide potential residents with information to evaluate it as a place to live. Fort Lauderdale, Florida, the county seat of Broward County, is located 25 miles north of the city of Miami and boasts a robust economy. It has about 3,000 hours of sunshine every year. Because of its pleasant weather and its location on the Atlantic Ocean, it is a major tourist and convention destination. It also is considered the Yacht Capital of the World. The city also has a 600,000-square-foot convention center west of the beach and southeast of downtown, attracting about 3.5 million people annually. The city's Port Everglades is the third-largest cruise port in the world. It almost goes without saying that hospitality and water recreation activities in Fort Lauderdale make up a large portion of the economy.

The population of the region and the city are growing. About 91,000 people work in Fort Lauderdale itself; some are residents of the city, while others commute to the city from other localities. As the area has grown over the past few years, its economy has diversified to include other industries. Learn all about the economy in Fort Lauderdale in the sections below.

Tourism and travel-related industries are strong in Fort Lauderdale, largely due to the city's average year-round temperature of about 75 degrees. The hospitality industry (accommodation and food services) employs about 11,000 people or 11.5 percent of the workforce. The city has about 10 million visitors annually, along with seasonal residents who live in Fort Lauderdale luxury homes during the winter. Greater Fort Lauderdale has more than 13 million overnight visitors per year. Cruise ships and other forms of nautical recreation form a large part of the tourism base. Retail trade is also a strong industry in Fort Lauderdale, with the number of visitors being a major driver for that industry. About 10,000 people work in retail. 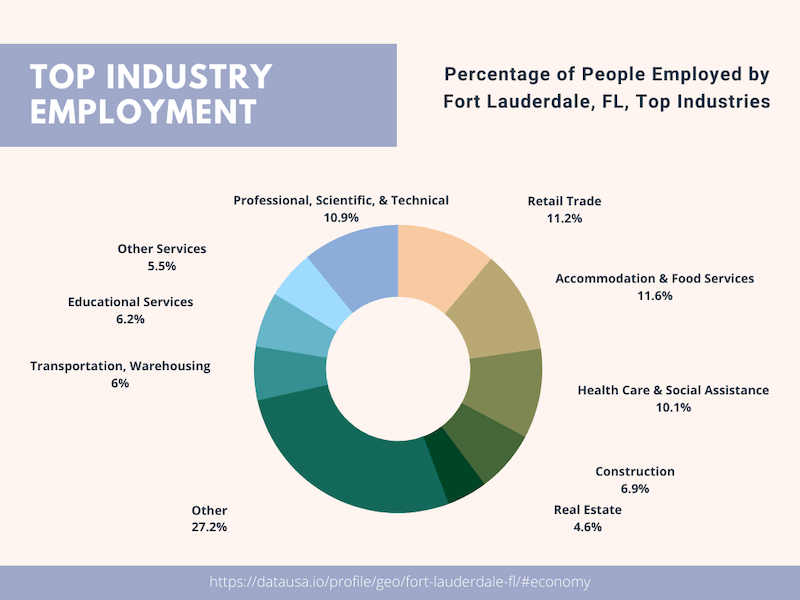 Broward County has one of the 10 largest public health systems in the country, and health care industries employ about 10,000 people.

The city has the largest central business district in the county, and several companies have offices there. Professional, scientific, and technical services industries employ about 9,500 people. This includes professions such as judges, lawyers, accountants, software developers, and management analysts. The Broward County School System is headquartered in Fort Lauderdale, as are several colleges. With about 6,000 employees, education is the fifth-largest industry in Fort Lauderdale.

The city also is a major manufacturing and maintenance center for yachts, as its canals and proximity to the Bahamas and the Caribbean make it a popular yachting stop. 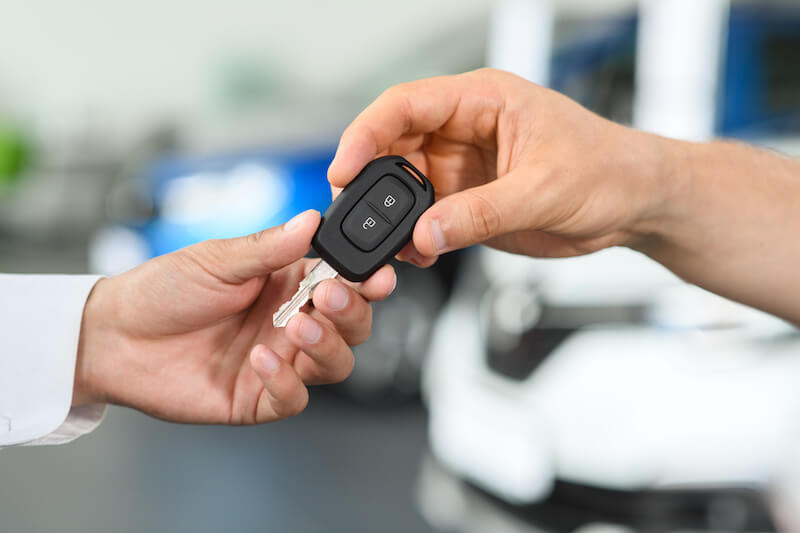 Broward Health, a public health system, is also headquartered in Fort Lauderdale. Founded in 1938, it has annual revenues of about $214 million and employs about 7,000 people. Holy Cross Hospital, a 559-bed not-for-profit hospital part of the Trinity System, employs about 2,300 people.

To gain a true picture of an area's economy, a review of facts and figures is important. Several statistics point to the economic growth in the area. Fort Lauderdale's job market is growing at a rate of about 2 percent per year. Over the next 10 years, its future job growth is expected to be about 38 percent, higher than the national average of about 33 percent. 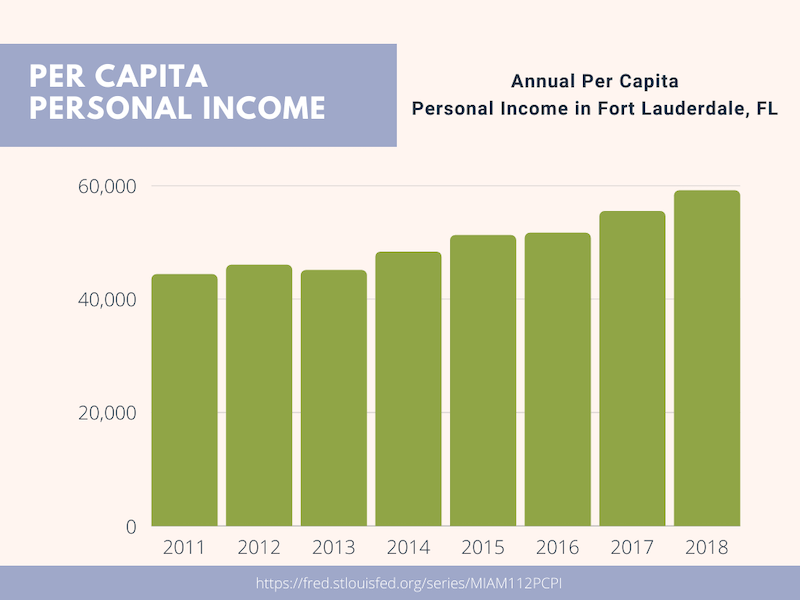 The average income for individuals in Fort Lauderdale also is about $36,400 annually, compared with the national average of about $28,500. Fort Lauderdale's high quality of life is reflected in the city's cost of living.

The city's unemployment rate is about equal to the national average.

The state of Florida has no state income tax. The sales tax rate in Fort Lauderdale is 7 percent, a little higher than the national average of 6.2 percent.

About 80 percent of the Fort Lauderdale workforce works in the private sector, 10 percent work for government entities, and about 7 percent own their own businesses.

Greater Fort Lauderdale is a vibrant, growing region of about 6 million people, 2 million in Broward County. Fort Lauderdale has large, established hospitality, retail, tech, education, and health care industries. The region has also attracted other industries such as marine, financial services, and logistics and is actively working to build upon them. Wages are better than average, and the state has no income tax. All of these factors drive the development of new construction homes in Fort Lauderdale. In addition to a vibrant economy, people moving to Fort Lauderdale get to enjoy living in one of the most beautiful beach cities in America.

If you're looking for a home in Fort Lauderdale, contact Laurie Finkelstein Reader Real Estate with Buy Hot Florida Homes at (954) 415-4602 to get in touch with a Fort Lauderdale real estate agent and discover your Florida dream home today.